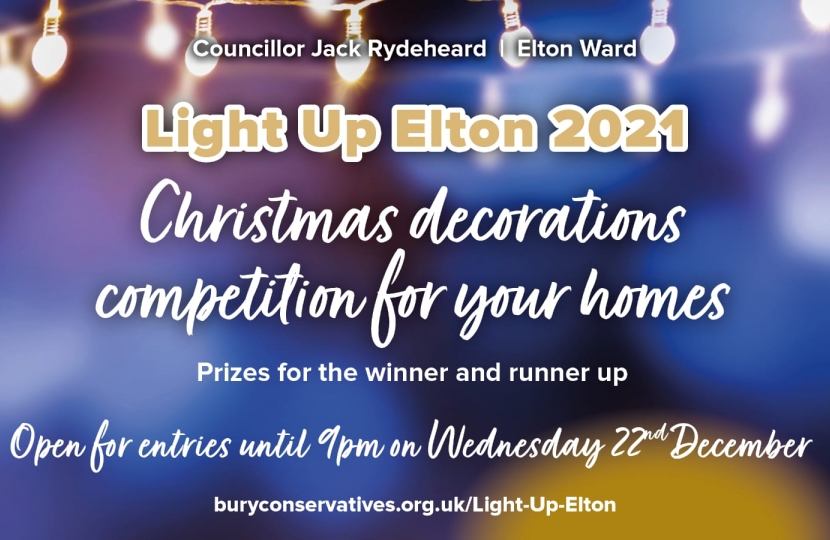 Elton's first Christmas lights competition, with a prize for the winner and runner up. This is Light Up Elton 2021, by Elton Councillor Jack Rydeheard.

It will be open for entries until 9pm on Wednesday 22nd December, and I will come round and judge entries between Thursday 23rd and Friday 24th, with the winner announced on Boxing Day.

Fill out our form below to submit your decorations, and Jack and the team will be round to judge between the 23rd and 24th of December!

Terms and conditions: Only one entry allowed per household. The competition will open for entries on Monday 6th December and close on Wednesday 22nd December. The winner will be chosen by Cllr Jack Rydeheard on the basis of creativity and aesthetic. Copyright to the entries will remain with the entrant, but the entrant licences Bury Conservatives and Cllr Jack Rydeheard to use photographs of any entries across websites, print, and social media. Judging will occur on the 23rd and 24th of December, with a winner announced on Boxing Day. No cash or prize alternatives are available. Entrants must reside within the Bury Metropolitan Borough Council local government ward of Elton. The winner will be announced publicly via social media. Entrants reserve the right to object to their details behind shared. All entrants are expected to act fairly and in the good spirit of the competition. We reserve the right to investigate any irregularities and disqualify entrants at its absolute discretion. Promoted by Jack Rydeheard on behalf of Bury Conservatives, both at 44a Bolton Street, Bury, BL9 0LL.